Here at Prime Publishing, we editors have a pretty sweet gig. We work on websites about food and crafts all day, we get to sample delicious recipes from our test kitchen, and we’re a pretty cool group of people on top of it all. In August, though, many of us got to try something totally new for the first time – a beginner’s knitting class!

First let me say that I have historically been pretty bad at anything craft-related. I had a brief love affair with crochet last year, making one scarf that looks okay from a distance before I realized it was stressing me out more than it was stress-relieving. I didn’t know much about knitting except that it required holding TWO sticks with your hands and considering how poorly I fared with crochet’s one, I didn’t have my hopes set very high. Still, the fact that everyone was also a beginner gave me hope and so at 11 am sharp, I headed up to our conference room where the class was to be held. 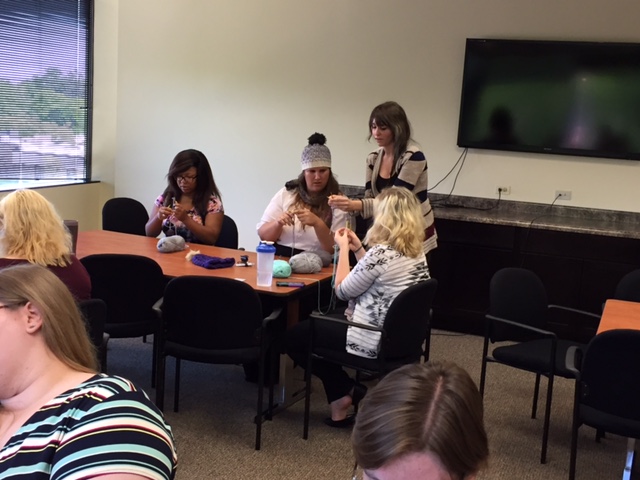 The ever-patient Kristina instructing the class! That’s the blonde back of my head all the way to the left.

I had a brief crisis about which color yarn to choose (I picked turquoise first, then swapped it for pink, then realized pink wouldn’t really look so hot with my hair if I decided to make a scarf so I went with a neutral cream color instead) and then confusion set in when I realized we would be using circular needles, which to me seemed like something people usually only did once they had some experience using the regular kind first. But Kristina, our instructor for the day, seemed like she knew what she was doing so I decided to just go along with it. 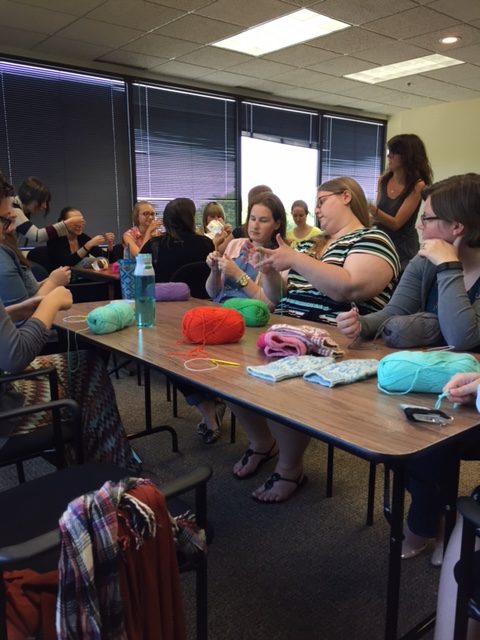 Some co-workers diligently working away!

Kristina wowed us all by passing around some things she had knitted herself, like a pair of mittens with a really cute deer on them. She then told us she’d only been knitting for a year, which gave me hope – either Kristina was superhuman or knitting was something that a person could get pretty darn good at in a short-ish amount of time. I wouldn’t doubt that Kristina was, in fact, a superhuman, but I figured that the latter could also be true. Heartened by this news, I picked up my yarn and watched Kristina demonstrate how to tie a slipknot for the class.

Aaaand I was already lost.

I mean, they didn’t teach us how to do knots in the Girl Scouts. I can make a killer lanyard, but slipknots? I was already in over my head. Fortunately, Kristina was endlessly patient and came around to help us all individually as we tangled ourselves in yarn.

Next came casting on, or as I like to call it, “wait, but where do all the loops come from?” It took some trial-and-error to get the technique down, but eventually I ended up with a nice row of 20 loops. My coworker then asked me for help with her own loops and I blanked on everything I had learned so far. We then both had to ask Kristina for help. Whoops.

I was starting to sweat at this point. The slipknot had confused me, and casting on went about as well as middle-school dance lessons – the needles and the yarn just didn’t seem to want to work together. I kept dropping the yarn and dropping the needles and forgetting which direction I was supposed to be wrapping my yarn in. And this isn’t even knitting yet, I thought! This is just the beginning!

As my coworkers plugged along with their own needles and yarn, Kristina came over to show me how to knit, for real. This the moment we’d all been waiting for. I held my breath as I watched her demonstrate the knit stitch on her own needles…

… and then let it out again. “Oh, that’s it?” I asked. Kristina confirmed that yes, that was it. As it turned out, the knitting part was a lot like the casting-on part and I managed it (almost completely) without dropping my needles at all. I was getting the hang of it! My inner perfectionist did a little dance.

By the end of the class, I had a respectable swatch of knitted yarn – probably enough for a mouse to wear as a fashionable capelet, if the weather were a little chillier. I also had a newfound respect for knitters everywhere – while I could see how knitting could be a fun and mindless activity after a while, it certainly would take a lot of practice before I was anywhere near that good. Still, I felt a lot more relaxed and very accomplished about having something concrete to show for my efforts (and something that looked pretty normal, unlike my Crochet Lemon Debacle of 2015.) 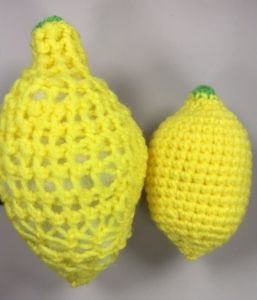 The crochet lemon debacle – my lemon, left, with a coworker’s that turned out just right. We can all see why I gave up crochet.

I can’t wait for our next knitting class, where we’ll learn how to purl – wish me luck! With practice and determination, I’m hoping to have a closet full of chunky scarves this fall and winter. Maybe this time next year I’ll be the one teaching the knitting class!

P.S. If you’re looking to learn how to knit, the stitch we learned was the garter stitch – you can check out our tutorial on how to knit it, then get to work on these knitting patterns!

How old were you when you learned to knit? Tell us about it in the comments!

The weather is starting to get consistently warmer, the birds are chirping more and more, and the flowers are starting to bloom - spring has sprung, … END_OF_DOCUMENT_TOKEN_TO_BE_REPLACED

This Valentine's Day, I have decided that I want to give the special people in my life something truly special.  Something more than just … END_OF_DOCUMENT_TOKEN_TO_BE_REPLACED 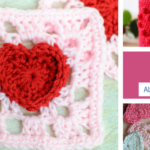 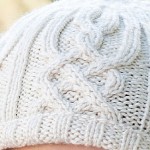